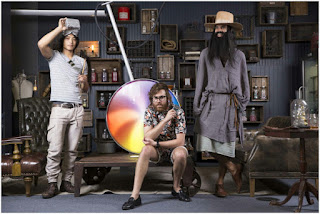 It is no secret that I love New York City, there is something fascinating about her. I was a child of the   80´s and 90´s and I think that the influence of New York in the popular culture of those two decades was massive, in terms of music, films and art. Although alternative spots of reference for the avant-garde popular culture have appeared around the world  in the last years , New York is still a swarm of creativity. A very good example are the guys from Fueled , an award winning app design and development company based in NYC. You may have heard of the popular game QuizUp, developed by them or their Barney app, for which they have recently won a Webby. Fueled´s headquarters are The Fueled Collective  in Lower Manhattan, a shared work office where they rent out space to other start ups to help them grow and collaborate with like minded individuals and industry experts. Last month, Fueled partnered up with artist Evan Desmond Yee , turning one of the meeting
1 comentario
Leer más
Más entradas